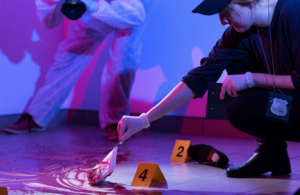 As a market leader, our goal is to become a trusted and respected resource in providing sophisticated DNA testing services and identification to law enforcement agencies, federal and state governments, Government Forensic science laboratories, crime laboratories and disaster management organizations in India and around the world. Innovation and the advancement of science in the field of forensic DNA identification is at the heart of everything that we do, and we strive to continue to be a leader in conducting research and development in the areas of molecular biology and related advanced technologies.

When India is regularly targeted for the disasters like Bomb Blasts and different Assaults,Its time now India shall get intoDNAForensics effectively and gather all the global recognition in the Investigation of different crime and Missing Person identifications with advanced DNA testing technologies. According to the recent reports by different agencies it’s a proven fact that DNA forensics and Identification has helped out to solve many sensational cases.

Parentage testing is the use of DNA fingerprinting to determine whether two individuals have a biological parent (Father/Mother)-child relationship. A paternity test establishes biological and genetic proof whether a man is the biological father of an individual, and a maternity test establishes whether a woman is the biological mother of an individual. DNA testing is the most reliable standard, The current techniques for paternal testing are by using polymerase chain reaction (PCR) and restriction fragment length polymorphism. DNA testing is currently the most advanced and accurate technology to determine parentage or paternity. In aDNApaternity test, the probability of parentage is 0% when the alleged parent is not biologically related to the child and the probability of paternity typically greater than 99.9% when the alleged parent is biologically related to the child.

The DNA paternity test that follows strict chain of custody can generate legally admissible results that are used for child support, inheritance, social welfare benefits, immigration, or adoption purposes. To satisfy the chain-of-custody legal requirements, all tested parties have to be properly identified and their specimens collected by a third party professional who is not related to any of the tested parties and has no interest in the outcome of the test.

In recent years, immigration authorities in various countries such as U.S.A (United states of America), U. K.(United Kingdom),Canada, Australia, France and others have been requesting immigration petitioners and beneficiaries in a family-based immigration case to voluntarily take the DNA paternity test when primary documents such as birth certificate to prove biological relationship are missing or inadequate.

The U. S. immigration authorities strictly require that the DNA test, if pursued, be performed by one of the laboratories accredited by the AABB (formerly American Association of Blood Banks). DNA Testing reports provided by BDRC is accreditated by almost all the testing authorities throughout the world.

BDRC Forensic DNA testing,Forensic Sample test, Forensic Casework test is backed by the range of biological evidence collection experts and they may travel to different crime scene on the request of the Investigating agencies. The experts have sound experience of working with different police departments and other related agencies. We believe that the scene of offence is temporary but the evidences collected are permanent and they help in the investigation throughout the case. BDRC have a range of DNA Testing and preservation facilities for biological samples like vaginal swabs, blood, bones, nails, skin cells and other evidences collected at the crime scene. For further queries about BDRC Forensic DNA testing,Forensic Sample test, Forensic Casework test please reach us.

We have around 30-35 Government Forensic science laboratories in India which have the burdan to cover all the crime sample testing. Many of the FSLs complain about the sample collected at the crime scene was either contaminated, sample was not in proper concentration, sample was cross contaminated, Improper sample collected and other several collection,packaging and improper transportation problems. In the present time Indian police and forensic science ground officials lack expertise in high end technological knowledge by which the evidence may be preserved and transported so that integrity of the evidence can be maintained. Police is the first sqaud which reaches the crime scene and they have the responsibility of crime scene protection and proper evidence collections. BDRC Forensic DNA testing,Forensic Sample test, Forensic Casework testing Forensic laboratory has experience in police training for protection of crime scene, Potential evidence collection, lifting, packing and transportation. Presently we are working with several states for improving the police so that science may be utilized to overcome the wrong convictions and reach to the right offenders. For all the details about different types of hands on trainings for FSLs, Police, Crime investigating agencies etc please contact us.

BDRC collaborations with several reputed laboratories and DNA Experts in USA and several other countries makes it leader in providing forensic DNA analysis to governments, crime agencies, Federal agencies, non-governmental organizations (NGOs), and disaster management organizations throughout the India and around the world. Operating one of the most respected private DNAlaboratories, our DNA experts have assisted in identifying victims of war, terrorism, airline crashes, crime, civil conflicts, and natural disasters. Our collaborators have worked on identification project for the World Trade Center-USA, Hurricane Katrina, the war in Bosnia, and the remains of U.S. soldiers dating back to the Vietnam War. Our experience in working with more than 25,000 skeletal samples from more than a dozen nations and hundreds of burial sights has lead to the development and improvement of multiple DNA extraction, purification, and amplification protocols which can be used to obtain superior results. Our collaborators are currently assisting several nations in large-scale human identification projects of those who have been missing for several decades. Technology developed by our collaborators was successfull in obtaining DNA profiles from highly challenged samples is the processing of remains from the World Trade Center attack. We also perform Y-STR and mitochondrial testing as needed. We can provide assistance in a variety of ways, including outsourcing of samples to us for testing, training scientists with us in India or in USA, training scientists at the host laboratory, assistance in management of a DNA laboratory, obtaining ISO accreditation and required accreditation, or for other needs particular to a client.

Run each test twice, following the most stringent procedures to guarantee accurate and conclusive results.

Schedule convenient appointments through our comprehensive network of collection sites.

We'd Love To Hear From You!

Fill out the form and our team will be in touch with you promptly. Thank you for your interest!